Mother of the Goddess’ Dormitory: 1x3

Koushi, At a Loss / Koushi Goes Back to School

On his first day at school Koushi is punished by Sutea Koroya, his friend he hasn’t seen since his house burned down. Sutea pretends to be mad at him but privately was worried. Sutea, who has heat intolerance, remembers Koushi became her friend because he would make his fingers cold with ice before holding hands. After listening to his story about Goddess dorm she insists on meeting the girls but Koushi accidentally falls on her. She is tempted to let something lewd happen but overheats and punishes him instead. Koushi hopes to show Sutea the dorm is perfectly normal, but when they arrive Mineru is half naked in the middle of yet another chemical explosion and Frey is cosplaying as a sexy bunny girl. 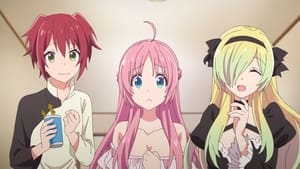